My relationship with Cartagena:
I grew up in the coffee growing region of the Colombian Andes.  A special treat on finishing secondary school was a visit to the Caribbean coast.  Cartagena was the icing on the cake.
The city, situated on the northern coast of Colombia, was once one the most important trading ports in the colonized Americas.  When I first visited, it was a sleepy town, languid enough to inspire several Gabriel Garcia Marquez novels (the Nobel-winning author has long kept a house here).
This seaside city is still a place where you can check in for a week or two of utter relaxation, but the city today is a far cry from the one I knew as a teenager.  It is now one of the chicest and most action-packed weekend destinations on earth.

Cartagena Cuisine
The Cartagena cuisine is a blend with three distinct influences:  Indigenous.  Spanish.  African. There’s an appendix below – to show which foods are associated with each influence.
The indigenous influence.  Food preparation was primitive – rocks were heated to boil food.  Spices weren’t used.  Although the splendour of the Aztecs was missing, the indigenous influence lives on in dishes such as arepa, casabe or cazabi, buns or rolls, bitivity (a dish made of fermented corn), the cacao, the flour chocolate made of corn and cacao.
The Spanish influence.  This is the strongest influence in Colombian cuisine – and especially in Cartagena.  Much of this can be traced back to King Fernando de Aragón – who organised the second voyage of Columbus.  This expedition to the New World sent farmers and agriculturists, who introduced all sorts of produce and fruits.  The Spanish influence was all pervasive and in the kitchen a new horizon opened.  From this period we have alfajor, alboronía, almojábana, bienmesabe, bizcocho, bollo, buñuelo, caspiroleta, chicharrón, empanada, jalea, mazamorra, lechón, lechona, turrón, olla, caldero, guiso, sopa, revoltillo, torta, sancocho.
The African influence. 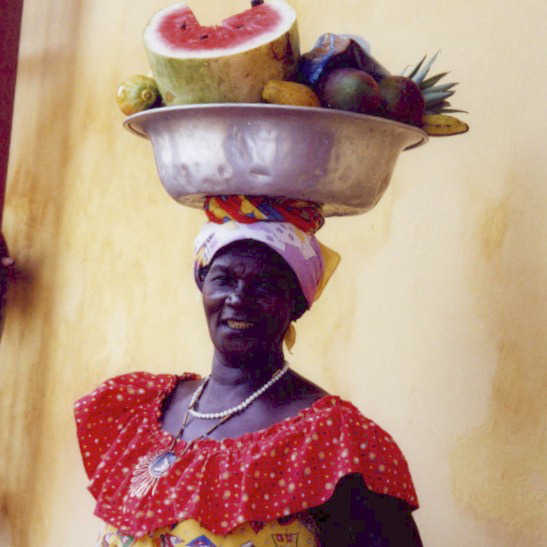 This influence introduced dishes such as mote de guandul, higadete, majuana, ajiaco with salted meat, mote de candia con mojarra, buñuelos de frijol.
One of the characteristics of Cartagena cuisine is the match of salt dishes with sweet. Examples include the cariseca, enyucado, and sweet platanos cooked in different ways.  Another characteristic shows in the manner that fried food is prepared – the beating of ingredients so that air is introduced. This is how we get the buñuelos of black headed beans – carefully beaten by hand so they are light as foam.
The seasoning of Cartagena is an equilibrium and harmony of flavours, where none stands out from the rest. White onion in abundance, sharp and scented pepper, achiote, chives, sweet chilli.  Tomato is indispensable.  Cumin with moderation.  Hot chilli and coriander are not used.
Visiting Cartagena
Architecturally significant colonial houses have been converted into glamorous boutique hotels. This new found popularity is partly due to Colombia’s vastly improved security situation, but also thanks to the colonial beauty (think Havana, without the crumbling buildings ). It doesn’t hurt that some of the best food in Latin America can be had here, whether it’s the piping-hot arepas (delicious cornmeal pancakes) sold by street vendors or the fresh seafood in its many world-class restaurants.  Dishes include: piqueo costeno, a sampler of stuffed fritters, otabala a the slow-cooked beef served with coconut rice and plantains, tiraditos spicy versions of ceviche. Or on that same street you can find restaurants where the emphasis is on Frenchified fusion: Prawns are brightened with a dash of pastis, or sea bass is served with Provencal vegetables.
If the tropical heat gets to be too much, stop by a coconut cart and drink the juice straight from the shell.  Don’t be scared to try – where else are you going to taste fruits with names like mamey, lulo, nispero, or zapote?
Finally – is Colombia really safe?  Absolutely.  Colombia has come a long way since the dark period of the 1970s and 1980s. Today, it’s an absolute pleasure to visit.
Appendix – Which foods come from which influence
Foods associated with the indigenous influence.
The indigenous cuisine used yucca, guanabana, mamey, cacao, cherimoya, caimito, anon, corn, sweet potato, pineapple, melon, tomato, sweet chili, achiote, bijao or vixa, and coconuts (which apparently floated from Polynesia).   They also ate turkey, guartinaja, five species of rabbits, turtles, crabs, jaibas, hicoteas, and many species of fish.
Foods associated with the Spanish influence.
Oranges, grapefruits, plums, apples, lemons, almonds, apricots, quince.  The Columbus expedition brought sugar cane that came from the Canary Islands.  Also introduced were wheat, barley, rice, rye, beans, chickpeas, lentils, kidney beans, garlic, olive oil, hens, horses and donkeys.
Foods associated with the African influence.
This brought:  ñame, candia or quinbambo or bamia, guandul, plátano, scent peppers or malaqueta, the dendé (which is palm oil grown mainly in Brazil), guinea hen, black headed beans.
]]>