We are delighted to share this article about the Hay Festival in Cartagena, written by Kevin Conroy Scott, a literary agent at Tibor Jones & Associates that also promotes and represents Latin American writers such as Juan Gabriel Vasquez and Oscar Guardiola Rivera in the UK . Kevin is also on the board of the Colombiage Arts Festvial. This article was published by the NewStatesman on 21 May 2010

Hay while the sun shines 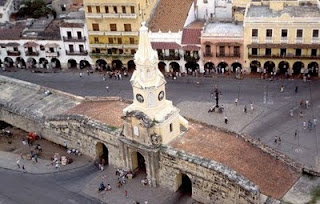 Ian McEwan is milling around the beautiful
courtyard of the Santa Clara Hotel in Cartagena, Colombia. “The temperature here is wonderful,” he says. “This must be the temperature of paradise.” The British novelist is in town for the Hay Festival Cartagena, one of six international offshoots of the annual literary event in Hay on Wye. But what exactly is a festival like this doing in a place like Colombia?
Despite its many problems and its strict class system, Colombia is going through something of a renaissance. The country’s president, Álvaro Uribe, has been in power since 2002 and has presided over a period of relative calm after 30 years of violence in which drug cartels funded paramilitaries in the jungle, who in turn protected the cartels’ business interests (almost 80 per cent of the world’s cocaine comes from Colombia). Uribe’s solution was aggressively to tackle the narcotics trade in the jungle while providing more security in major cities.
It has been a controversial strategy, drawing criticism from human rights groups. Senior figures in the Uribe administration have themselves been linked to drug trafficking and right-wing death squads. But eight years on, Colombia is arguably a safer place. Or at least it feels that way.
In Cartagena, the “Venice of the Caribbean”, time stands still as horse-drawn carriages pass down lantern-lit streets and the voices of street vendors float on the tropical breezes. I asked Peter Florence, Hay’s founder, how he felt about the festival coming to Cartagena. “For most countries, security is taken for granted. But security is new for Colombia. And that security feels like an adventure.”
Among the authors attracted to Hay Cartagena is Mario Vargas Llosa. His talk was dominated by the buzz phrase of the festival, “perpetual presidents”. Zimbabwe’s Robert Mugabe and Colombia’s feared neighbour, Hugo Chávez of Venezuela, were mentioned as culprits. “Perpetual presidents have left their countries in disaster,” Llosa said through a translator. “As a Peruvian I have a lot of experience with this.” This was greeted with raucous laughter and applause. Later I met a business teacher from Cartagena, and asked her about the audience’s reaction. “Uribe is trying to change the constitution to remain in power for a third term in the same way. But most Colombians don’t want to change because we think things are good now.”
In Cartagena there is a sense that there are now two Colombias. At one of the many lavish parties hosted by Bogotanos with second homes on the coast, a live salsa band played while empanadas and aguardiente were served by the pool. When I returned to my hotel in Getsemani, the working-class quarter just outside the old town, I met a French economics professor who had retired to Cartagena. He told me that “64 per cent of Colombia is owned by 0.04 per cent of the people. That’s where all the problems stem from.”
It is often said that periods of great instability produce great art. If this is true, I asked Juan Gabriel Vásquez, a Colombian author whom many tip as the heir apparent to Gabriel García Márquez, is Colombia going through a golden age during this time of relative quiet? “I don’t think conflict leads invariably to great art,” he said. “If it did, Colombia would have produced nothing but masterpieces since 1810.”
But Colombia is full of masterpieces. And people’s attitudes towards culture are changing as the country begins to export more of it. The pop singers Shakira and Juanes have both sold millions of albums in the US and Europe. But what is more surprising is the international success of the telenovela, the Colombian soap opera. On my way back to London, I stopped in Bogotá and met the king of the format, Fernando Gaitán, the screenwriter/producer who created the global hit Ugly Betty. “Colombia is well known by everyone for its violence. So I thought it was very interesting to counteract that image,” he said, surrounded by his awards in his penthouse office. “Colombia is a country that consumes its own culture. This is very rare. My work focuses on everyday lives, the matters that are universal, like love stories. It’s the universal stories that travel abroad, not the stories of violence.”
So does Hay Cartagena, with all its gravitas and prestige, need to reflect the more complicated texture of Colombian culture? The
London-based Colombian academic Oscar Guardiola-Rivera, author of the forthcoming book What If Latin America Ruled the World?, just shrugged. “Given that there are so few scenarios for rational discussion in my country, that Hay Cartagena exists is an unqualified good for Colombia.” And there’s new hope for Colombians who think their country is stagnant. In March, the constitutional court rejected Uribe’s attempt to change the constitution to get a third presidential term. And now Colombia is in the grip of election fever. The former mayor of Bogotá, Antanas Mockus, is gathering momentum as the candidate of choice for the left-leaning student population looking to challenge the long conservative rule. They go to the polls later this month, so Colombia won’t have a perpetual president any time soon.
Kevin Conroy Scott is a literary agent at Tibor Jones & Associates and on the board of the Colombiage arts festival
]]>